skip to main | skip to sidebar

It looks like I'm headed over to wordpress. The username is the same, and my posts were migrated over, so the only important thing that's different is the address.

Posted by Justin at 4:11 PM No comments:

Cosma Shalizi notes something we've all been thinking, that being sane involves thinking some really crazy things right now. In college, I found myself to the right of many people I dealt with, in part because I had an active bullshit trigger (not saying it was an accurate one, just active). When I hear conspiracy coming from the right wing, it confirms my liberalism, while when they come from the good guys, I get this close to talking about "long haired hippies." The same goes for suggestions that we impeach the president. So it's not a comfortable position I find myself in thinking that there have been unconstitutional secret wiretaps of American citizens, that the government is just disappearing people, or that the Vice President claims to not be part of the Executive branch.

The biggest issue for me is electoral fraud, especially the fact that no one talks about it. Every so often, articles surface discussing the issue, only to be met with silence, as if there is a tacit agreement that we are better off not discussing the possibility. The most high profile place one appeared was in Rolling Stone, though that source doesn't make it sound less kooky.

I would love nothing more than to read something decisively disproving that the 2004 election was swayed by voter fraud. In the long run, it's more comforting to think that 51% of voters embraced an insane administration than to think that 48% did, and the other 3% of the votes were tampered with. If the election was rigged, I want to know, if it's not, I want someone to step up and decisively refute the whispers.

Posted by Justin at 3:18 PM No comments:

I'm curious what Ezra Klein's thought is here--he says that impeachment of either Bush or Cheney would be a bad idea, but that the media should be discussing the possibility more. With a slim-majority and near-majority favoring Cheney's and Bush's respective impeachments, the media obviously should be paying attention, but there's other reasons why it's important. The Scooter Libby pardon shows that the administration will resist almost any attempt to restrain its actions. Just as in diplomatic negotiations, leaving all the options on the table is a good idea. Maybe if the MSM was regularly discussing impeachment, the administration would pretend to care about public opinion. If there weren't a case for impeachment, this wouldn't be a defensible tactic, but as Brad Delong has pointed out, there's precedent for viewing this abuse of the pardon as grounds for impeachment.

Posted by Justin at 2:53 PM No comments:

My understanding is that Friday cat blogging used to be a thing. It looks like I'm late to the party, though. 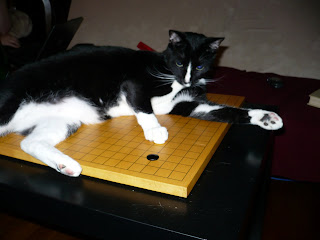 When I got home from vacation, he was acting snippy, meowing when I petted him, etc. He's calmed down, and is now taking out his aggression on the go board. 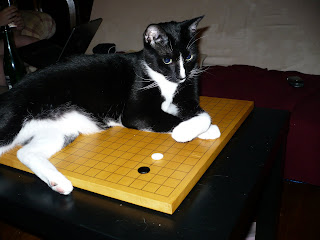 The initial high approach to komoku exhibits an aggressive stance, intended to show fighting spirit and take the opponent out of his game, as does sitting on three-quarters of the board.

Posted by Justin at 5:56 PM No comments:

There's a new Harry Potter book coming out. People are talking about it and predicting things. I have two predictions to make.

In any case, I'll read Amanda's copy while she sleeps.

Posted by Justin at 4:29 PM No comments:

Justin
I'm a philosophy graduate student at Pitt. This was my blog from 2005-2007, but I've now migrated to wordpress.

What I've Been Reading